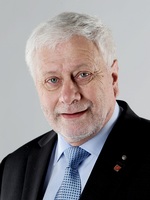 Since 1986 Friedrich Schneider is Professor of Economics at Johannes Kepler University of Linz, Austria, and since 2006 he is Research Professor at the DIW Berlin, Germany.

He obtained his PhD in Economics from the University of Konstanz in 1976 and has since held numerous visiting and honorary positions at a number of universities (e.g. at Aarhus University, Aarhus, Denmark; La Trobe University, Melbourne, Australia; University of Saarbrücken. Saarbrücken, Germany; Otago University, Dunedin, New Zealand). During 1991 to 1996 he was Dean of Social Science and Economics at Johannes Kepler University of Linz and Vice President for Foreign Affairs of the Johannes Kepler University of Linz from 1996-2007. He was President of the Austrian Economic Association during 1997-1999 and from 2005-2008 he was President of the German Economic Association (Verein für Socialpolitik). From 2013 - 2016 he is Chairman of the Academic Advisory Board at the Zeppelin University, Friedrichshafen, Germany. He has also been consultant to numerous organisations including the Brussels EU Commission, IMF, World Bank.

He has published extensively in leading Economics journals including The American Economic Review, The Quarterly Journal of Economics, The Economic Journal and the Journal of Economic Literature. He has also published numerous book chapters and books including The Shadow Economy (with Dominik H. Enste, Cambridge Uni. Press, 2002), The Encyclopaedia of Public Choice Vol. I and II (with Charles K. Rowley, Kluwer, 2004), Changing Institutions in the European Union (Edward Elgar, 2004), Readings in Public Choice and Constitutional Political Economy (together with Charles K. Rowley, Springer Publishing Company 2008), The Economics of the Hidden Economy (editor of 2 volumes, in: Mark Blaug (ed.) The International Library of Critical Writings in Economics, Edward Elgar Publishing Company 2008), Handbook of the Shadow Economy (Edward Elgar Publishing, 2011), and The Shadow Economy (with Colin C. Williams, The Institute of Economic Affairs, 2013).