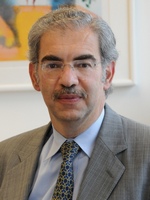 Mexican economist Santiago Levy Algazi became the Vice President for Sector and Knowledge of the Inter-American Development Bank (IDB) on March 1, 2008. From August 2007 to Feburary 2008, he served as General Manager and Chief Economist for the IDB Research Department.

Previously, he was General Director at the Mexican Social Security Institute (IMSS) from December 2000 to October 2005. Under his tenure, he promoted changes to the Social Security Act to increase transparency and accountability in IMSS finances and create long-term reserves.

From 1994 to 2000, Levy served as the Deputy Minister at the Ministry of Finance and Public Credit of Mexico, becoming the main architect of the renowned social program Progresa-Oportunidades that benefits the poor. He managed budgetary adjustments during the 1994-95 economic crisis and the 1998 fall in oil prices. Previous positions include President of the Federal Competition Commission and Director of the Economic Deregulation Program at the Ministry of Trade and Industrial Promotion.

Levy holds a Ph.D. in economics from Boston University and a Masters in political economy from the same university. He was a post-doctoral fellow at Cambridge University.

Levy has advised several governments and international organizations and has held several teaching positions, including faculty positions at the Instituto Tecnológico Autónomo of Mexico and Boston University, where he was Associate Professor and Director of the Institute for Economic Development.

He is the author of at least 75 articles, monographs and book chapters on such diverse subjects as poverty reduction, competitiveness, foreign exchange policy, export imbalances, pricing, microeconomics and energy. His paper Poverty in Mexico won the 1992 National Research Prize in Economics awarded by the Bank of Mexico.