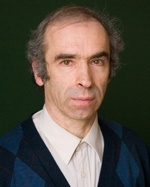 Mihails Hazans is a professor of econometrics at the University of Latvia and an independent labour market expert. He has published on migration, commuting, economics of education, ethnic minorities, informal employment, labour supply, active labour market policies, working conditions, job search, unemployment risk, and determinants of earnings. His research deals with labor markets issues in Baltic countries, Albania, as well as other European countries.

Prof. Hazans has served as an expert, consultant or principal investigator in numerous projects for OECD, World Bank, USAID, European Commission, ILO, Global Development Network, European Agency for Reconstruction, European Training Foundation, as well as for various national institutions. He is a member of Advisory Board of Latvian State Employment Agency.

In 2011, Mihails Hazans received the annual "Spidola award in economics" for his research on emigration from Latvia.
One of his publications has been listed by the Latvian Academy of Sciences among the top 10 achievements of Latvian science in 2012.

Mihails Hazans joined IZA as a Research Fellow in March 2010.