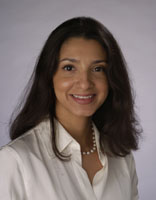 Kalena E. Cortes is an Associate Professor of Public Policy in the Bush School of Government and Public Service at Texas A&M University, a Research Fellow at the Institute for the Study of Labor (IZA), and a Research Associate at the National Bureau of Economic Research (NBER). She completed her Ph.D. in Economics at the University of California at Berkeley and was a Postdoctoral Research Associate at Princeton University. Her research interests are in the areas of the Economics of Education, Labor Economics, and Economic Demography. Recent topics include affirmative action policies in higher education, the effects of double-dose algebra and course-scheduling policies on student achievement, postsecondary returns to education, and the educational outcomes of immigrant children in the United States.

Her published articles include: "Are Refugees Different from Economic Immigrants? Some Empirical Evidence on the Heterogeneity of Immigrant Groups in the United States" published in The Review of Economics and Statistics; "The Effects of Age at Arrival and Enclave Schools on the Academic Performance of Immigrant Children" and "Do Bans on Affirmative Action Hurt Minority Students? Evidence from the Texas Top 10% Plan" published in the Economics of Education Review; "Race/Ethnicity and Nativity Differences in Alcohol and Tobacco Use During Pregnancy" published in the American Journal of Public Health; "A Double Dose of Algebra" published in Education Next; "Achieving the DREAM: The Effect of IRCA on Immigrant Youth Postsecondary Educational Access" and “Academic Undermatching of High-Achieving Minority Students: Evidence from Race-Neutral and Holistic Admissions Policies” published in the American Economic Review; “Intensive Math Instruction and Educational Attainment: Long-Run Impacts of Double-Dose Algebra” published in The Journal of Human Resources; and "Ranking Up By Moving Out: The Effect of the Texas Top 10% Plan on Property Values" published in the National Tax Journal (winner of the 2014 Richard Musgrave Prize for best article).