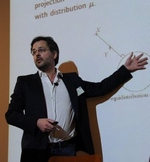 Alfred Galichon is a Professor of Economics at Sciences Po, Paris, which he joined in 2012. Prior to that, he was a Professor at Ecole Polytechnique, and he had been a visiting professor at Columbia University and at the University of Chicago, Booth School of Business.

Pr. Galichon’s research interests range widely from theoretical to empirical questions and include Econometrics, Economic theory, and Quantitative Finance. His research is motivated by the desire to understand the decisions of economic agents – investment, insurance, marriage, transportation – using advanced quantitative methods, and has been published in journals such as the Journal of Econometrics, Econometrica, the Review of Economic Studies, the Journal of Economic Theory, and Mathematical Finance. He is a member of several Editorial Boards including the Review of Economic Studies and Economic Theory. In 2012, he has been one of the recipients of the European Research Council (ERC) Grants awarded by the European Commission for his research on matching markets. In 2010 he was nominated for the best French young economist award by the Cercle des Economistes and Le Monde newspaper.

In addition to his academic research, Pr. Galichon also has served as a consultant or a collaborator to various organizations including Goldman Sachs, EDF, Lafarge, and Air France. Alfred Galichon received his Ph.D. in Economics from Harvard University in 2007 and his B.Sc. from Ecole Polytechnique (X97) in 2000. He is a Chief Engineer of Corps des Mines (Ingénieur en chef des Mines) and a Research Fellow of the Center for Economic Policy Research (CEPR).