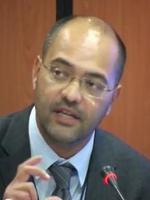 Haroon Bhorat is Professor of Economics and Director of the Development Policy Research Unit (DPRU) at the University of Cape Town, South Africa. His research interests cover labour economics, poverty and income distribution. He has co-authored two books on labour market and poverty issues in South Africa, and has published more than 150 academic journal articles, book chapters and working papers. He recently co-edited The Oxford Companion to the Economics of South Africa (with Alan Hirsch, Ravi Kanbur and Mthuli Ncube).

Prof. Bhorat has his PhD in Economics through Stellenbosch University in South Africa. He studied at the Massachusetts Institute of Technology and was a Cornell University research fellow. Prof Bhorat holds the highly prestigious National Research Chair under the theme of Economic Growth, Poverty and Inequality: Exploring the Interactions for South Africa. He is a Non-resident Senior Fellow at the Brookings Institution affiliated to the Global Economy and Development Program, and the Africa Growth Initiative (AGI)

Prof Bhorat consults with international organizations such as the ILO, the UNDP, the World Bank, Ratings Agencies and emerging market fund managers. He is a member of the World Bank’s Advisory Board of the Commission on Global Poverty. He was also a member of the UN Commission on Legal Empowerment of the Poor (LEP), and was Head of Research for the UN’s High-Level Panel on the Post-2015 Development Agenda.

Prof. Bhorat has undertaken extensive work for several South African government departments – most notably the South African Department of Labour, the Presidency and the National Treasury. He is a Director on the Board of the Western Cape Tourism, Trade and Investment Promotion Agency (WESGRO), is a member of the Statistics Council, Statistics South Africa, and sits on the South African Journal of Economics Editorial Board. He has served on a number of government research advisory panels, and was an economic advisor to the former Minister of Finance, and former Presidents Thabo Mbeki and Kgalema Motlanthe, formally serving on the Presidential Economic Advisory Panel.

He joined IZA as a Research Fellow in January 2013.

IZA Discussion Paper No. 9204
Minimum Wages in Sub-Saharan Africa: A Primer
Haroon Bhorat, Ravi Kanbur, Benjamin Stanwix
IZA World of Labor Article
Compliance with minimum wage laws in developing countries
Haroon Bhorat
Type
We use Google Analytics in compliance with German Data Protection Law. The site gathers data for the sole purpose of improving its services. You're able to decline now or later. By using our services, you agree to our use of cookies. You'll find more information here.
Details
Accept
DE