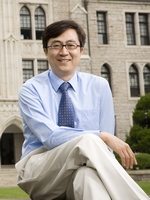 Jinyoung Kim is Professor of Economics, Korea University, in Seoul, Korea. He is also a research associate of the Center of Excellence on Human Capital, Technology Transfer, and Economic Growth and Development, at the State University of New York at Buffalo. He currently serves as Associate Editor at Journal of Human Capital. He received a B.A. in economics from Seoul National University, and a Ph.D. in economics from the University of Chicago in 1994 for his dissertation “Knowledge Creation, Human Capital Investment and Economic Growth” under the guidance of Professor Gary Becker. He previously taught at the State University of New York at Buffalo. His research interests include human capital, family economics, labor mobility, technological innovation and intellectual property rights, income inequality, and economic growth. His publications have appeared in such journals as Canadian Journal of Economics, Economic Inquiry, Journal of Development Economics, Journal of Human Capital, Rand Journal of Economics and Review of Economic Dynamics. He received the Kuznets Prize for best article in 2004-06 at Journal of Population Economics.

IZA Discussion Paper No. 10815
Racing against Time in Research: A Study of the 1995 U.S. Patent Law Amendment
Jinyoung Kim
IZA Discussion Paper No. 9599
Immigration, Human Capital Formation and Endogenous Economic Growth
Isaac Ehrlich, Jinyoung Kim
Type
We use Google Analytics in compliance with German Data Protection Law. The site gathers data for the sole purpose of improving its services. You're able to decline now or later. By using our services, you agree to our use of cookies. You'll find more information here.
Details
Accept
DE