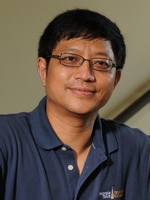 Haizheng Li is Professor at the School of Economics, Georgia Institute of Technology; he received his Ph. D in economics from the University of Colorado-Boulder. A specialist in applied econometrics, labor economics, development economics and the Chinese economy, he has authored numerous journal articles, book chapters, and policy reports. He has received a number of grants funded by, among others, the Sloan Foundation, the European Union, the National Natural Science Foundation of China, and various Chinese government ministries and Chinese universities.

Li has helped establish the China Center for Human Capital and Labor Market Research (CHLR) at the Central University of Economics and Finance in Beijing, an international research center focusing on human-capital and related labor-market studies, and the Center for Economics, Finance and Management Studies at the Hunan University. In the CHLR, he leads a project that measures and analyzes China’s human capital and the project team publishes annual China Human Capital Report.

Li has served as a member of the Advisory Board of China Economic Review, as the President of the Chinese Economists Society (2006-07), a consultant for the World Bank, and Chair of the Expert Advisory Board on Large Data Projects for the National Natural Science Foundation of China. He holds several special-term professor positions at universities in China, including the Renmin University of China. At Georgia Tech, he served as Co-director of the Georgia Tech-Shanghai Summer Program, as a member of the Academic Senate, and as a General Faculty Assembly Representative.