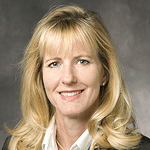 Kathryn Shaw is Ernest C. Arbuckle Professor of Economics at the Graduate School of Business, Stanford University. Professor Shaw studies how the firm's choice of its human resource management practices can produce measurable performance gains. She is identified as the co-developer of the field of "insider econometrics," a research field within economics in which researchers go within companies and use insider knowledge and data to identify the performance gains from management practices. In early work, she (and her co-authors) use production-level data from firms in the steel industry to model the effects of alternative management strategies on productivity.

Professor Shaw's most recent research focuses on managing talent to increase productivity in a range of industries. She studies how firms attract and build star talent in the software industry and in other knowledge-intense industries. In addition, she does research on performance gains from the use of information technologies and human resource practices in service sector and retail sector firms. Her research has been extensively funded by the National Science Foundation, the Alfred P. Sloan Foundation, and the Russell Sage and Rockefeller Foundations.

At Stanford, she teaches Data Driven Human Resource Strategy and Managing Talent classes, wherein she often brings her research into the classroom. Previously, Shaw was a Member of President Clinton's Council of Economic Advisers (1999-2001) and was the Ford Distinguished Research Chair and Professor of Economics at the business school at Carnegie Mellon University.

She completed her Ph.D. in economics at Harvard University in 1981. In 2008, she was elected a Fellow of the Society of Labor Economists; in 2001 Shaw received the Columbia University award for the best paper on international business, and in 1998 she was honored as the recipient of the Minnesota Award for Employment Research for the best paper in 1997-98 on the topic of employment issues. She has received several teaching awards, has been the Trust Faculty Fellow for 2005-06, the recipient of the Xerox Research Chair. She has served on a Research Panel of the NSF and was an editor of several academic journals. She is currently an editor at World of Labor.

She joined IZA as a Research Fellow in March 2012.

IZA World of Labor Article
Bosses matter: The effects of managers on workers’ performance
Kathryn Shaw
Type
We use Google Analytics in compliance with German Data Protection Law. The site gathers data for the sole purpose of improving its services. You're able to decline now or later. By using our services, you agree to our use of cookies. You'll find more information here.
Details
Accept
DE