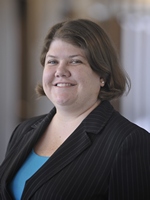 Elizabeth’s research focuses on the economics of education and in particular, the early years of children’s development. She has written articles on the effect of age at school entry on later academic and labor market outcomes. In addition, she has researched the effect of fiscal incentives in state funding formulas on special education identification and placements and the effects of school principals on student achievement. Her current research focuses on programs and interventions and their effects on early child development.

Her research has been published in top economics and education journals such as the Quarterly Journal of Economics, Journal of Human Resources, Education Finance and Policy, Educational Evaluation and Policy Analysis, and the Economics of Education Review. It also has been cited by the popular press, including The New York Times, in the book Outliers by Malcolm Gladwell and has appeared on 60 Minutes.