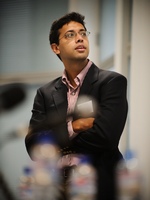 Ahmed Mushfiq Mobarak is a Professor of Economics at Yale University with concurrent appointments in the School of Management and in the Department of Economics.

Mobarak is the founder and faculty director of the Yale Research Initiative on Innovation and Scale (Y-RISE). He holds other appointments at the Jameel Poverty Action Lab (J-PAL) at MIT, the International Growth Centre (IGC) at LSE, and Innovations for Poverty Action.

Mobarak has several ongoing research projects in Bangladesh, Brazil, Chile, India, Indonesia, Kenya and Malawi. He conducts field experiments exploring ways to induce people in developing countries to adopt technologies or behaviors that are likely to be welfare improving. He also examines the implications of scaling up development interventions that are proven effective in such trials. His research has been published in journals across disciplines, including Econometrica, Science, The Review of Economic Studies, the American Political Science Review, Proceedings of the National Academy of Sciences, and Demography, and covered by the New York Times, The Economist, Science, NPR, Wired.com, BBC, Wall Street Journal, the Times of London, and other media outlets around the world. He received a Carnegie Fellowship in 2017.

Mobarak is currently collaborating with Evidence Action in multiple countries to replicate, test, and scale his research program that encourages rural to urban internal seasonal migration to counter seasonal poverty. This program, called No Lean Season, is supported by GiveWell.org, Good Ventures and the Global Innovation Fund, and the start-up accelerator Y-Combinator.