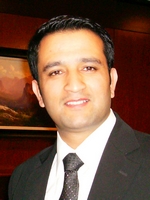 Masood Gheasi has a Master and a PhD degree in Law and Economics (Faculty of Law, University of Bologna, Italy). Furthermore, he has a second PhD in Economics (Faculty of Economics and Business Administration, VU Amsterdam, The Netherlands). As a consequence, he has a broad range of research skills, a deeper understanding and knowledge of Law and Economics. Masood Gheasi is currently a postdoctoral researcher at GSSI.

His research interests have revolved around labor economics, as well as internal and international mobility of people. He is interested in identifying the root causes of people’s mobility and its socioeconomic impacts on both sending and receiving societies. During the 7 years of his research career, he has published various articles in different international peer reviewed journals and chapters in books aiming to inform the public and influential social institutions on the socioeconomic impact of migration. Thus, his research is based on social and economic theories by utilizing rigorous econometric techniques.

He is proud of receiving the Public Service Medal in the year 2000 from the President of Afghanistan Hamid Karzi for his outstanding service during the “Afghan Constitutional Analysis and Dialogues” project, which was funded by the United States Institute of Peace (USIP).