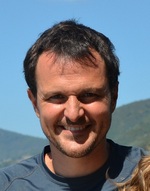 Paolo Naticchioni is associate professor at the University of Roma Tre (Department of Political Science and CREI). Currently on leave, being in the research department of INPS (Italian Social Security Administration). He received his Ph.D. in Economics from the Université Catholique de Louvain (2008), where he also received a M.Sc. in Economics. He also received a PhD in Economics from the University of Rome La Sapienza (2004). He has been the secretary of the Italian Association of Labour Economics (AIEL, 2016-2019), and member of the steering committee since 2010.

He joined IZA as a Research Fellow in September 2012.