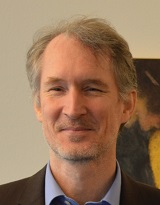 Klaus Wälde has been Professor of Economics at the Johannes-Gutenberg University Mainz since May 2009. Since May 2020 he serves as IZA Visiting Research Fellow.

He previously held professorships at universities in Dresden, Würzburg and Glasgow. When joining the JGU, he received a 5-year research grant by the Gutenberg Research Council. Klaus has been working on economic theory, business cycles and international trade since the beginning of his PhD studies in 1992 at the University of Kiel, Germany.

He has published in leading international journals among which the Journal of Economic Theory, the Economic Journal or the International Economic Review. Recent work focuses on labour markets and their reforms (especially the Hartz Reforms in Germany) and on 'Emotional Economics'. He also contributed chapters to a textbook and taught Applied Intertemporal Optimization, an advanced textbook at the PhD level, at various universities.

He was invited for talks and research visits to many European countries, to North America and Asia. He is also a member of CESifo (www.cesifo.de) and an Extra-mural Fellow of the Department of Economics of the Université catholique de Louvain, Louvain-la-Neuve (www.ires.ucl.ac.be). He is an associate editor of the Journal of Economics. He worked for the World Bank and as an adviser at the European Commission.

His life took various dramatic turns with the birth of his first daughter in 2007, the birth of his second daughter and with his wife resuming full time work. Ever since he has been wondering about work-life balance. He considers 'compassion' and 'self-knowledge' as most central to his Weltanschauung.