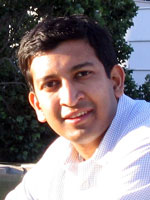 Raj Chetty is a Professor in the Economics Department at Harvard University. Chetty received his Ph.D. from Harvard in 2003 and joined the faculty of Berkeley as an Assistant Professor at the age of 23. He moved to Harvard in 2009 as one of the youngest tenured professors in the history of the university. Chetty serves as Co-Director of the Public Economics Program at the National Bureau of Economic Research and Editor of the Journal of Public Economics.

Chetty has published papers in leading journals on a wide range of topics related to government policy. He has studied the effects of risk on households and their implications for social welfare policy. He has also studied the effects of dividend taxation on corporate behavior. Most recently, his research has focused on the long-term impacts of early childhood education. These studies have been cited in media outlets including the New York Times, Wall Street Journal, and Business Week, as well as in Congressional testimony.

Chetty has been awarded three National Science Foundation grants for his research, including a CAREER award, the NSF's most prestigious grant for young researchers. He was awarded an Alfred P. Sloan Research Fellowship, the 2008 American Young Economist award, and the 2010 IZA Young Labor Economist Award. He was recently named one of the "top young economists doing work on real-world problems" in the New York Times and one of the best young economists of the past decade by the Economist magazine.

He joined IZA as a Research Fellow in January 2011.

IZA Discussion Paper No. 2590
The Spike at Benefit Exhaustion: Leaving the Unemployment System or Starting a New Job?
David Card, Raj Chetty, Andrea Weber
published in: American Economic Review, 2007, 97 (2), 113-118
Type
We use Google Analytics in compliance with German Data Protection Law. The site gathers data for the sole purpose of improving its services. You're able to decline now or later. By using our services, you agree to our use of cookies. You'll find more information here.
Details
Accept
DE