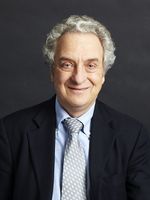 Dr Piggott has a long standing interest in retirement and pension economics and finance. His publications include more than 100 journal articles and chapters in books. He has also co-authored two books, both published by Cambridge University Press.

He was a member of the Henry Tax Review Panel and served for several years on the Ministerial Superannuation Advisory Committee. Internationally, e has been a consultant to several foreign governments on pension issues, including Russia and Indonesia. In 2007 he was appointed Visiting Professor, Zhejiang University, China, and from 2008-2010 was Visiting Scholar with the Department of Insurance and Risk Management, Wharton School of Business, University of Pennsylvania.

IZA Discussion Paper No. 8812
Pension Reform and Labor Supply: Flexibility vs. Prescription
Erik Hernaes, Simen Markussen, John Piggott, Knut Røed
revised version published as 'Pension Reform and Labor Supply' in: Journal of Public Economics, 2016, 142, 39–55
Type
We use Google Analytics in compliance with German Data Protection Law. The site gathers data for the sole purpose of improving its services. You're able to decline now or later. By using our services, you agree to our use of cookies. You'll find more information here.
Details
Accept
DE