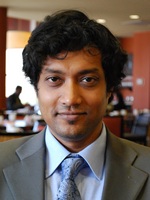 Tirthatanmoy Das is an Associate Professor of Economics at the Indian Institute of Management, Bangalore (IIMB). He earned a Ph.D. from the State University of New York at Binghamton in 2012. Prior to joining IIMB, he was an Assistant Professor of Economics at the University of Central Florida from 2014 to 2017, and at Temple University from 2012 to 2014. He also worked at Oxus Research and Investments (New Delhi, India) as an economist from 2003 to 2007.

Tirthatanmoy Das joined IZA as a Research Fellow in February 2013.