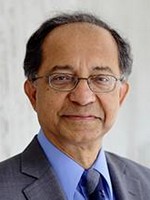 Kaushik Basu is the Chief Economist and Senior Vice President of the World Bank. He was recently appointed President-Elect of the International Economic Association. Prior to joining the World Bank, he served as Chief Economic Adviser to the Government of India and is currently on leave from Cornell University where he is Professor of Economics and the C. Marks Professor of International Studies. Mr. Basu is a Fellow of the Econometric Society and received India’s Padma Bhushan award as well as the National Mahalanobis Memorial award. Mr. Basu’s contributions span development economics, welfare economics, industrial organization and game theory. In addition to Cornell, he has taught at the Delhi School of Economics, Harvard, Princeton and MIT. He has published widely, including more than 160 papers in refereed journals and scholarly volumes, and has contributed articles to many widely read magazines and newspapers. He has authored several books including Beyond the Invisible Hand: Groundwork for a new Economics (Princeton University Press and Penguin). Mr. Basu holds a PhD in economics from the London School of Economics. He is the second World Bank Chief Economist from a developing country and the first from India.

He joined IZA as a Research Fellow in September 2006.