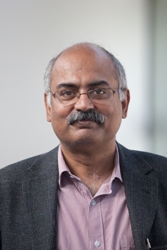 Sumon Bhaumik received his undergraduate education at Presidency College, Calcutta, and got his masters and doctoral degrees in Economics from the University of Southern California. Later, he worked both within and outside of academics in Bulgaria, Germany, India and the United Kingdom. Currently, he is a Professor at the Management School at the University of Sheffield.

He is also a member of the peer-review college of ESRC, including for the GCRF Peer Review Group, and an expert at large for the Executive Agency for Small and Medium-sized Enterprises of the European Commission. Further, he is an associate editor of Emerging Markets Finance and Trade, and has recently accepted an invitation to join the Editorial Review Board of Journal of World Business. Until recently, he was a member of the editorial board of Economic Systems.

His research interests are wide ranging, and include corporate governance and firm performance, banks and credit markets, multinational enterprises, and impact of economic reforms. In the past decade, he has worked on a number of projects funded by ESRC, DfID, NESTA, UKTI and UKIERI.