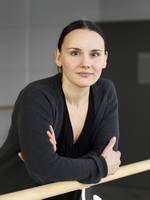 Mariola Pytlikova is an assistant professor at CERGE-EI in Prague (under the U.S. permanent charter and at the Charles University) and a senior researcher at the VSB Technical University Ostrava. Previously she worked as as a senior researcher at the Danish Institute of Governmental Research (KORA), and as an assistant professor and postdoctoral researcher at Aarhus University. She received her PhD in Economics from Aarhus University in 2006. In the past she has hold visiting stays at Princeton University, University of Illinois at Chicago, University of Modena and Reggio Emilia and Universitat Pompeu Fabra in Barcelona. Mariola is a recipient of Kateřina Šmídková’s Award 2015 for the best female economist and the 2005 Young Economist Award from the Czech Economic Society.

Mariola’s research interests are in the field of labor economics and industrial relations, in particular topics dealing with international migration and ethnic diversity, gender differentials, and income inequality. She has published in outlets such as the Economic Journal, European Economic Review, Journal of Environmental Economics and Management, Journal of Population Economics, International Migration Review, European Journal of Population and the Economics of Transition among others.

She joined IZA as a Research Fellow in September 2014.