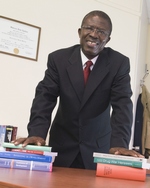 Kwabena Gyimah-Brempong is Professor of Economics at the University of South Florida at Tampa where he has been Department Chair since 2004. Gyimah-Brempong has also held professorial positions at New College of Florida and Wright State University, Dayton, Ohio. He was an Economics Program Director at the National Science Foundation from 2002-2004 and a senior research economist at Elliot Berg Associates at Alexandria, VA between 1986 and 1987. He is a past Secretary/Treasurer and President of the African Finance and Economics Association (AFEA) as well as a past President of National Economics Association. He consults regularly for the African Development Bank, United Nations’ Economic Commission for Africa, African Capacity Building Foundation, and the National Science Foundation, among others.

Gyimah-Brempong holds a BA (Honors) in Economics from University of Cape Coast, Ghana and a PhD in Economics from Wayne State University. His research focuses on economics of crime, efficiency in public production, and economic development of Africa. He has published several articles in refereed journals including the American Economic Review, Review of Economics and Statistics, Journal of Business and Economics Statistics, Journal of Development Economics, Economic Development and Cultural Change, Economics of Education Review, Information Economics and Policy, and Journal of African Economies. He serves on the Editorial Boards of Southern Economic Journal and Journal of African Development. Gyimah-Brempong has also contributed chapters in several books.