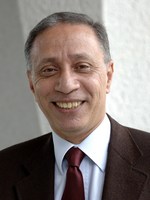 Ibrahim Awad is a Graduate of the Faculty of Economics and Political Science, University of Cairo, and received his Ph.D. in Political Science from the University of Geneva, Switzerland. He has researched and published in Arabic, English, French and Spanish in political economy, employment, international labour migration, human and labour rights, international relations, international organization and regional integration. He held positions with regional and United Nations organizations in Argentina, Spain, Switzerland, Lebanon and Egypt. Most recently he was Director of the International Migration Programme, ILO Headquarters, Geneva, 2005-2010. Previously he was Director of the ILO Sub-regional Office for North Africa in Cairo, 2001-2005, and Secretary of the Commission, United Nations Economic and Social Commission for Western Asia (ESCWA), 1999-2001.

He is a member of boards and scientific councils of several institutions, programmes and projects related to research on development, migration and human rights. At present he is Professor of Public Policy at the American University in Cairo (AUC), School of Global Affairs and Public Policy and Director of the Center of Migration and Refugee Studies (CMRS) at AUC.