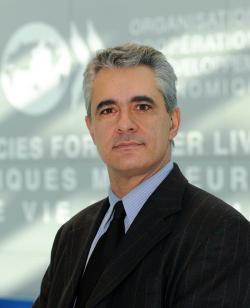 Stefano Scarpetta is the director for Employment, Labour and Social Affairs at the O.E.C.D; his brief also covers OECD work on health and international migration.

In 1991, he joined the OECD where he worked on a number of key projects of the organization. In particular, he led several large scale research projects, including: "Implementing the OECD Jobs Strategy"; the "Sources of Economic Growth in OECD Countries"; “The Policy Challenges of Population Ageing" “The Effects of Product Market Competition on Productivity and Labour Market Outcomes”.

He moved to the World Bank in 2002 where he took over the responsibility of labour market advisor and lead economist. In this capacity, he coordinated a Bank-wide research program of Employment and Development and contributed extensively to the Bank's investment climate assessments. He was also one of the leading authors of a number of flagship publications of the Bank, including the World Development Report on "A Better Investment Climate -- For Everyone" (September 2004), the book on "Enhancing Job Opportunities in Eastern Europe and the Former Soviet Union" (November 2005) and the book on “Job Creation in Latin America and the Caribbean”.

He returned to the Economics Department of the OECD in November 2006 where he became the head of the Country Studies Division in charge of Japan, Korea, China, India, Mexico, Portugal, Denmark and Sweden. From March 2008 to June 2010, he was the editor of the OECD Employment Outlook and the head of the Employment Analysis and Policy division of the Directorate of Employment, Labour and Social Affairs (DELSA). He was appointed deputy director of DELSA in July 2010 and he is since May 2013 the director of DELSA.

He has published extensively in academic journals and edited several books in the fields of: labour economics and industrial relations; economic growth; and industrial organisation (see the CV). His current research interests include comparative economic systems, the analysis of labour market policies and institutions, the role of regulations and institutions for productivity growth, creative destruction and job reallocation.

Stefano Scarpetta joined IZA as a Research Fellow in December 2004 and acted as Program Director of the Institute’s research area “Employment and Development” until February 2016.