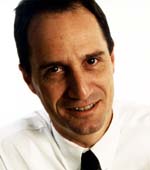 Pflüger's current research interests center around the new trade theory with heterogeneous and homogeneous firms, the new economic geography and the theory of the multinational firm. A special focus of his work is on issues pertaining to locational competition (in subsidies, taxes, environmental policies) and another special focus is on the labor market effects of trade and FDI.

He is a member of the scientific board of IAB-Nuremberg and currently the head of the regional and urban economics section of the Verein für Socialpolitik.

Michael Pflüger joined IZA as a Research Fellow in April 2001.