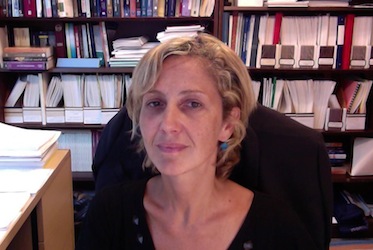 Anna Maria Mayda is an Associate Professor of Economics at Georgetown University, with a joint appointment in the Department of Economics and the School of Foreign Service. She studied statistics and economics at University of Rome La Sapienza, where she received her degree summa cum laude in 1997. Before graduate school, she worked at the World Bank in the Latin America and Caribbean Region Unit. In June 2003, she completed a PhD in Economics at Harvard University, where she was also a doctoral fellow at the Center for International Development. Since 2003 she has been at Georgetown University, first as an Assistant Professor (2003-2009), next as an Associate Professor with tenure (2009-now). In the spring of 2004, she held a visiting position at the International Monetary Fund where she served as a Resident Scholar at the Trade Unit of the Research Department. During the 2007-2008 academic year, she was on leave at Centro Studi Luca d'Agliano, University of Milan, with a Marie Curie Fellowship within the TOM (Transnationality of Migrants) program, financed by the European Commission.

Anna Maria Mayda's research mainly focuses on issues of trade, immigration and development economics and has been published in journals such as the European Economic Review, the Review of Economics and Statistics, the Journal of International Economics, the Journal of Population Economics, and the Canadian Journal of Economics. She has also been awarded a National Science Foundation (NSF) grant. In terms of topics, she has worked on the determinants – labor-market, welfare-state and non-economic determinants – of individual attitudes towards trade and immigration across countries; on preferential trade agreements; on the most-favored-nation clause in the GATT/WTO system; on international trade negotiations; and on the determinants of international migration flows. More recently, she has been working on the role played by interest groups in shaping U.S. trade and migration policy.