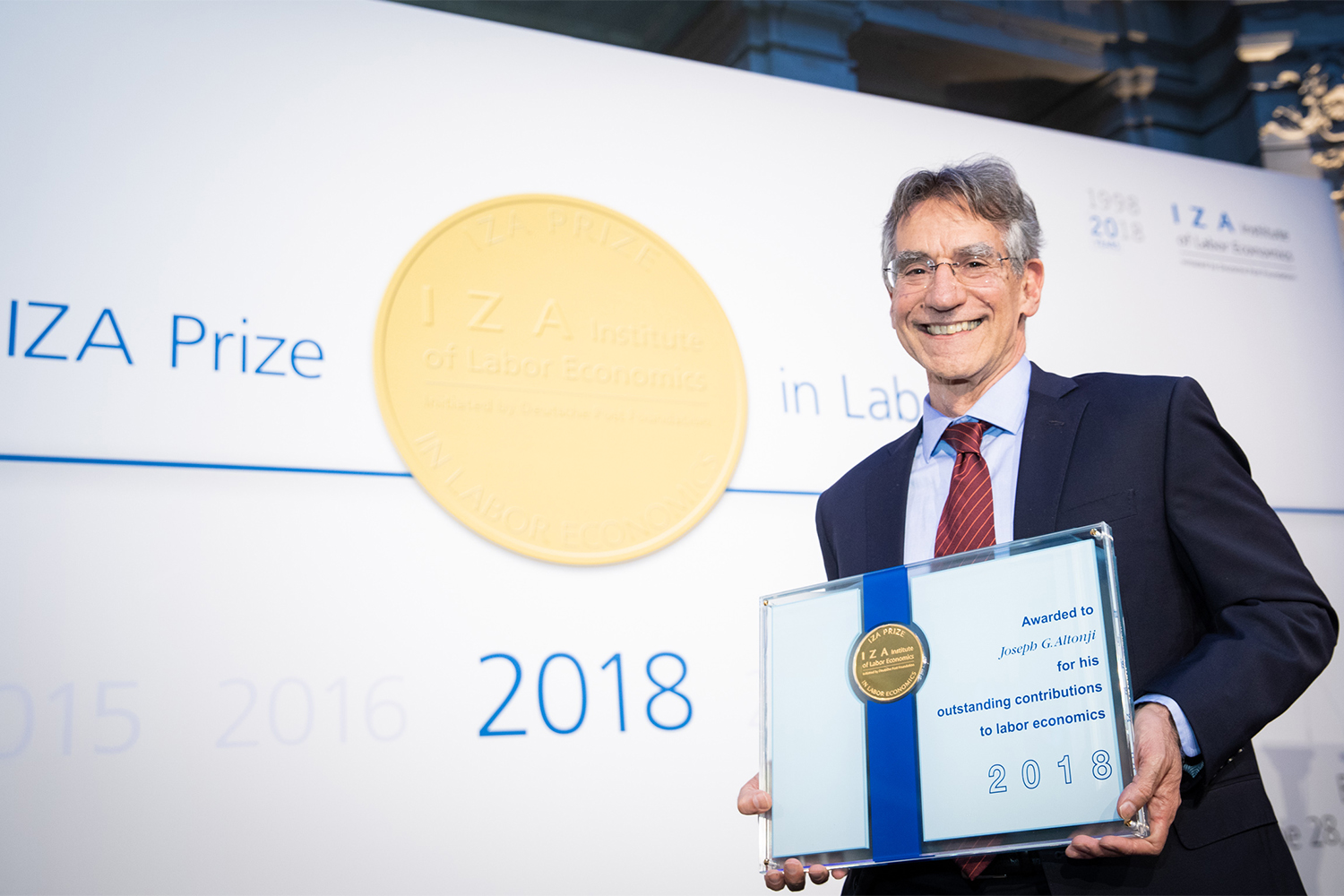 Joseph G. Altonji (Yale University) received the 2018 IZA Prize in Labor Economics for his seminal contributions to the economic analysis of labor supply, family economics and discrimination. The prestigious award was conferred during the World Labor Conference celebrating IZA’s 20th anniversary in Berlin on June 28, 2018.

According to the award statement, “Altonji’s contributions have shaped the understanding of how households decide on their labor supply under fluctuating business cycles and changing labor markets, whether the family is the relevant unit of economic decision making, and what the mechanisms behind labor market discrimination are. An overarching theme of his work is that even the most insightful and fundamental theoretical advances must be supported by rigorous empirical evidence.”

More in the IZA Newsroom. 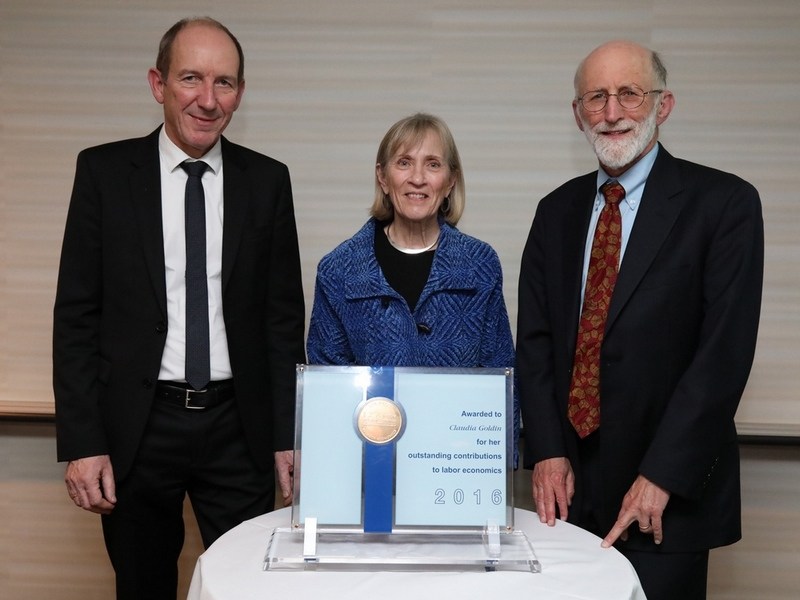 Claudia Goldin, the Henry Lee Professor of Economics at Harvard University, for her career-long work on the economic history of women in education and the labor market.

The award ceremony at which the Prize was conferred took place during the annual meeting of the Allied Social Science Associations in Chicago, IL, USA on January 6, 2017.

The decision on awarding the Prize had been made by the IZA Prize Committee, which consists of six distinguished economists, five of whom are previous Awardees.

The 2015 IZA Prize in Labor Economics was awarded to Czech-born economist Jan Svejnar, the James T. Shotwell Professor of Global Political Economy and Director of the Center on Global Economic Governance at Columbia University’s School of International and Public Affairs, New York.
Professor Svejnar received the IZA Prize, widely regarded as the most prestigious science award in the field of labor economics, for his major contributions to comparative economics in general and the economics of transition in particular. The award ceremony was held during the annual IZA/World Bank Conference on Employment and Development in Bonn, Germany, June 4-6, 2015.

Cornell professor Gary S. Fields is the winner of the 2014 IZA Prize in Labor Economics for his outstanding contributions on the importance of efficient labor markets to fight poverty and foster economic development in low- and middle-income countries. The IZA Prize is regarded as the most prestigious science award in the field. The award ceremony will take place during the ASSA annual meeting in Boston on January 4, 2015.
According to the award statement from the IZA Prize Committee, Fields pioneered economic thinking about labor markets in developing countries by focusing on indicators such as poverty, inequality and income mobility. Fields’ policy recommendations aim at increasing the level and security of wages for employees and self-employed by incentivizing investments in the private sector, growth and international trade, and by providing the necessary skills and business know-how to stimulate labor demand. In this respect, Fields also shows the shortcomings of previous development aid, which had not sufficiently targeted labor market needs.
The Prize was awarded by IZA Director Klaus F. Zimmermann during the ASSA Meeting in Boston on January 4, 2014, with a laudatory speech by Ira N. Gang. 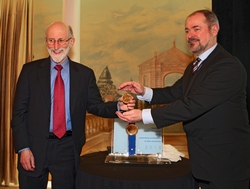 Daniel S. Hamermesh (University of Texas at Austin and Royal Holloway, University of London) is the 2013 winner of the IZA Prize in Labor Economics. He received the prestigious award in recognition of his fundamental contributions to the analysis of labor demand during an award ceremony in Washington, DC, on November 18.
According to the Prize Committee, "Hamermesh's research is characterized by a focus on thought-provoking questions, a high level of creativity, and careful combination of theoretical and empirical methods. He has shaped the way other scholars, as well as policy makers, think about some of the key issues in labor economics." 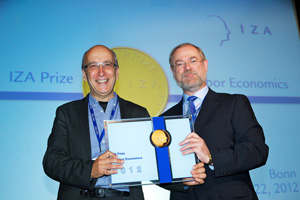 On September 22, 2012, IZA Director Klaus F. Zimmermann awarded this year's IZA Prize in Labor Economics to Richard Blundell (University College London and IFS) during the Annual Conference of the European Association of Labour Economists (EALE) hosted by IZA in Bonn. The Prize honors Blundell's path-breaking contributions to the econometric analysis of labor markets and public policy reforms.
According to the Award Statement, "Professor Blundell has played a major role in the development of modern labor and policy analysis. His work is characterized by a focus on pressing questions in economic policy, the development of cutting-edge econometric methods to tackle such questions, and painstaking analysis of micro data. Blundell's contributions laid the foundations for the modern economic analysis of labor supply, consumer behavior, and policy reforms."
Richard Blundell holds the David Ricardo Chair of Political Economy at University College London. He is a graduate of the University of Bristol and London School of Economics. Since 1986 he has been Research Director of the Institute for Fiscal Studies (IFS), where he is also Director of the ESRC Centre for the Microeconomic Analysis of Public Policy. He has been on the editorial board of many academic journals and is also one of the editors of the Mirrlees Review of Tax Reform which reported its findings in 2011. In a similar spirit, IZA recently proposed a tax reform concept for Germany, which is based largely on methodology developed by Richard Blundell.
"Richard is a role model to many researchers across the globe. His work is a remarkable combination of academic excellence and policy relevance," said Zimmermann. 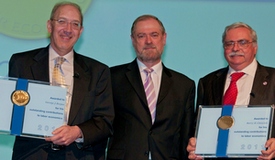 This year's IZA Prize in Labor Economics was awarded to the U.S. economists George J. Borjas (Harvard University) and Barry R. Chiswick (George Washington University). The prestigious award recognizes their fundamental contributions to the economic analysis of migration and integration. Borjas and Chiswick have pioneered the economic analysis of global migration and its impact on labor markets and social security systems. They have been the leading figures in the intense debate about earnings assimilation and the nature of migrant selectivity. Their research has made migration an important subdiscipline of economics with high policy relevance.
The award ceremony took place in Oslo, Norway, on August 25. 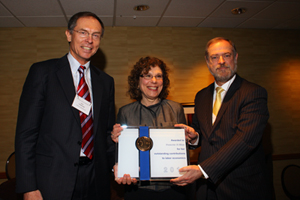 The IZA Prize in Labor Economics 2010 was awarded to U.S. economist Francine D. Blau (Cornell University). The prestigious award recognizes Blau's seminal contributions to the economic analysis of labor market inequality. She has written extensively on the role of women in the labor market and on gender differences in pay and many other aspects of economic life. Her work has profoundly shaped the view of scholars and policymakers on the causes and consequences of gender differences in economic outcomes, and on policies for advancing women’s labor market position and well-being.
The award ceremony took place at the ASSA annual meetings in Denver on January 8, 2011.
Read more: 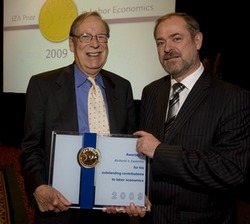 The 2009 IZA Prize in Labor Economics, endowed with 50,000 euros, was awarded to U.S. economist Richard A. Easterlin (University of Southern California). The prestigious award recognizes Easterlin's outstanding research on the analysis of subjective well-being and on the relationship between demographic developments and economic outcomes. In both fields, his work laid the foundations for broadening the scope of traditional economic analysis and thus contributed to advancing our understanding of behavior in a wide variety of economic settings such as education, labor supply decisions and the economics of the family. The official IZA Prize Ceremony took place in Washington D.C. on October 22, 2009. 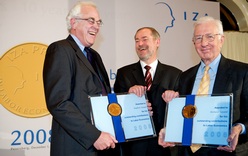 The IZA Prize Committee selected Richard Layard and Stephen J. Nickell to receive the 2008 IZA Prize in Labor Economics. The award honors their path-breaking work on the relationship between labor market institutions and unemployment. Their research provided a theoretical and empirical framework for the analysis of equilibrium unemployment and the impact of labor market institutions on economic performance. According to the award statement, the contributions of Layard and Nickell have illuminated the policy discourse in Europe and increased academics' understanding of the nature and causes of involuntary joblessness. Lord Richard Layard is Emeritus Professor of Economics at the London School of Economics (LSE) and a Labour life peer in the House of Lords. Stephen Nickell is Warden of Nuffield College, University of Oxford, and was previously a Professor of Economics at LSE and a member of the Bank of England Monetary Policy Committee. The IZA Prize Ceremony took place at the Petersberg Hill near Bonn on December 1, 2008, as part of IZA's 10th anniversary celebrations.
Read more:

This 2007 IZA Prize in Labor Economics was awarded to the U.S. economist Richard B. Freeman (Harvard University and London School of Economics), who has made a number of fundamental contributions that have monumentally shaped modern labor economics. The renowned IZA Prize honors Freeman's groundbreaking work on the sustainability of the welfare state and the role of trade unions in the labor market. His highly innovative studies address policy-relevant issues that have important implications for labor market reforms in Germany.
The award ceremony was held on November 5, 2007, in Berlin with German Federal President Horst Köhler as the invited speaker (see picture on the right). 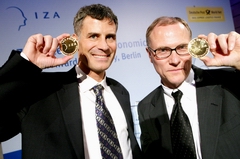 The IZA Prize in Labor Economics 2006 was awarded to the outstanding American labor economists David Card (University of California, Berkeley) and Alan B. Krueger (Princeton University). According to the IZA Prize Committee, their work has crucially shaped the research agenda in labor economics and has raised the standards for empirical research in applied economics. "David Card and Alan Krueger have stimulated labor economics for many years with their original research approaches, the practical relevance of their results, and their remarkable use of natural experiments to test common hypotheses," said IZA Director Klaus F. Zimmermann during the announcement of the IZA Prize Committee decision in Bonn. "The findings by Card and Krueger are highly relevant for labor market policy in Germany, particularly with regard to raising school quality." 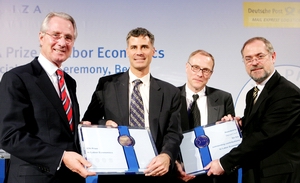 The 2006 IZA Prize was awarded by Klaus Zumwinkel, CEO of Deutsche Post World Net and President of IZA, and IZA Director Klaus F. Zimmermann on November 8, 2006, during a festive ceremony in Berlin. Deutsche Post World Net has sponsored IZA since the foundation of the institute in 1998. The IZA Prize was established in 2002 and  is considered the most esteemed science award in labor economics worldwide.

On October 24, the IZA Prize in Labor Economics 2005 was awarded to Dale T. Mortensen (Northwestern University) and Christopher A. Pissarides (London School of Economics) in honor of their path-breaking contributions to the analysis of markets with search and matching frictions. Before an audience of some 250 invited guests at the Sony Center in Berlin, IZA Director Klaus F. Zimmermann and Monika Wulf-Mathies (Deutsche Post World Net) presented the award to Mortensen and Pissarides. Gerard Pfann (Maastricht University) gave the laudation speech for the prize-winners. The event, which was moderated by TV anchor Cherno Jobatey, included a speech by Federal Minister of Finance Hans Eichel, who also participated in the subsequent panel discussion.
The work by Mortensen and Pissarides is highly relevant for today's policymakers as it has led to a better understanding of unemployment and job flows. Their models, which are now widely used in labor economics and macroeconomics, have highly enriched research on unemployment as an equilibrium phenomenon, on labor market dynamics and cyclical adjustment. They show how the intensity with which workers search and the decision when to accept a job offer determine the distribution of unemployment durations. 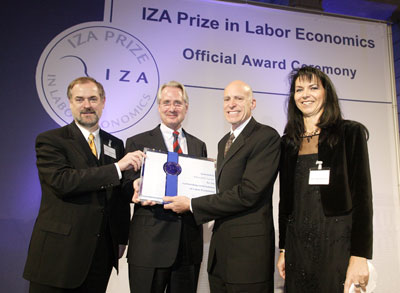 In a festive atmosphere, around 200 invited guests from Germany and abroad witnessed the official award ceremony of the IZA Prize in Labor Economics 2004, which was presented to the U.S. economist Edward P. Lazear (Stanford University).
Wolfgang Clement (Federal Minister of Economics and Labor) praised the laureate's contributions to practical labor market research and emphasized the prominent role of IZA in providing policy advice on labor market issues.

The laudation for Edward Lazear was held by Uschi Backes-Gellner (University of Zurich), who praised Lazear as a driving force behind personnel economics. Lazear himself stressed in his acceptance speech the strong influence of personnel economics on entrepreneurial practices and strategies.

In 2003, the IZA Prize in Labor Economics was awarded to Orley Ashenfelter (Princeton University).

The winner of the 2002 IZA Prize in Labor Economics was Jacob Mincer (Columbia University).