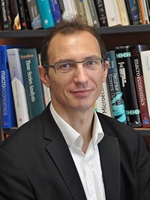 Etienne Wasmer is Professor of Economics at Sciences Po Paris. He is a Research Fellow in the Labour Program of CEPR and in the International Macroeconomics program. He is the founding co-director of Sciences-Po LIEPP (an Interdisciplinary Center for the Evaluation of Public Policies), which was awarded a 10 million euros grant from the French government in 2011.

Etienne received a Ph.D. in Economics at the London School of Economics and Political Sciences. He is a member of the Council of Economic Advisors of the French Prime Minister, where he reported on Employment, Housing, Training Policy and Geographical Mobility, among other items. He has been a co-editor of Labour Economics: An International Journal. He has been a consultant for the European Commission and for the European Central Bank.

Etienne Wasmer joined IZA as a Research Fellow in October 1999.